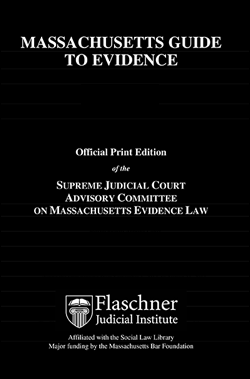 The 2021 edition contains 35 new cases that address important evidentiary questions. It also adds a new guideline, Section 1119, that addresses the hearsay and authentication issues that may arise when digital evidence stored on personal electronic devices, such as cell phones, is offered and an objection is made. Section 1119 also explains the steps that the judge and the parties should take to ensure the fair consideration of the evidence and the preservation of the evidence and the surrounding legal issues for any further consideration in the Trial Court and appellate review, both when the hearing or trial is in person as well as virtual. The updated edition also includes a significant revision to Section 1116, clarifying how a judge must analyze the exercise of peremptory challenges to jurors in both civil and criminal cases. Several other guidelines and the accompanying notes in the 2021 edition have undergone substantive revision based on new appellate court decisions including Sections 404(b), 412(a), 608(b), 801, 803, 1101(c)-(d).

The 2021 Evidence Guide may be ordered through Massachusetts Lawyers Weekly. Click the button below for more information:

You will be redirected to Lawyers Weekly to complete this purchase.

Massachusetts judges who have not received a copy of this benchbook may request a copy:

The SJC Advisory Committee on Massachusetts Evidence Law makes the Guide available on the court's website.