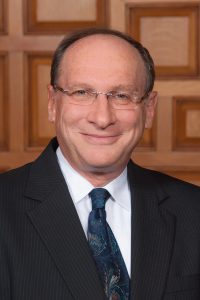 “Say not, they die, those splendid souls,
Whose life is winged with purpose fine;
Who leave us, pointed to the goals;
Who learn to conquer and resign.
Such cannot die; they vanquish time,
And fill the world with glowing light,
Making the human life sublime
With memories of their secret might.”
Pablo Neruda

The Officers, Trustees, and staff of the Flaschner Judicial Institute deeply mourn the passing of Ralph D. Gants, Chief Justice of the Supreme Judicial Court, and Honorary President of the Flaschner Judicial Institute.  No words are sad enough to voice our deep feelings of personal loss for our wonderful friend and colleague. We extend our condolences to his wife Deborah and his two children, Rachel and Michael.

Chief Justice Gants left an indelible impression on the legal landscape of Massachusetts.  His legal opinions not only as a superior court judge, but also as a justice and chief justice of the Supreme Judicial Court were persuasively reasoned, logical, lucid, and comprehensive in scope.  They will continue to guide judges and lawyers for decades to come.  Opportunities will soon present themselves for a thorough assessment of the chief’s many scholarly and path-breaking opinions and his role in leading the oldest continuously functioning appellate court in the Americas.

Chief Justice Gants also was one of those exceedingly rare persons holding high public office who found time to listen to the myriad of judges, court staff, lawyers and others who wanted to share an idea, air a grievance, or identify a problem that each of them believed was a matter of personal and professional importance.  In a meeting, formal or casual, he gave you his full attention.  He was an active listener.  He combined the ability to see far out to the horizon on issues and yet take notice of what was happening at the moment.  He was both a strategic thinker and a tactician.  He had a wonderful sense of humor.  Much more will be said about the personal qualities Chief Gants brought to his public service that endeared him to all who worked with him at the appropriate time.

Chief Justice Gants was a staunch ally of the Flaschner Judicial Institute.  He once remarked at a meeting of all the chief justices that Flaschner was not only an important organization, but that its programs were essential to judicial education in Massachusetts, and that it was entirely appropriate that Flaschner was independent of the judicial branch.    When the idea for an all court conference on race and implicit bias took shape, Chief Justice Gants turned to Flaschner to host it.

Chief Justice Gants used the full power of his formidable intellect and his steadfast moral compass to advance an agenda that made access to justice and equal justice for all non-negotiable objectives.    He spoke publicly and forcefully against hate speech and acts of violence and intimidation against members of racial, religious, and ethnic minorities.   He defended the need for trial judges to have discretion in fashioning appropriate sentences as essential to the cause of justice.  In 2015, Chief Justice Gants made an unprecedented decision to join Governor Baker, the Speaker of the House, and the President of the Senate in signing a letter inviting the Council of State Governments to come to Massachusetts and undertake a comprehensive study of our criminal justice system led to the sweeping Criminal Justice Reform Law of 2018 which ameliorated many features of Massachusetts criminal law that disproportionately impacted communities of color.

In June of this year, Chief Justice Gants and his SJC colleagues published a letter urging judges and lawyers to reflect on their conduct and to condemn racism whenever it is manifested.  The Justices wrote, “as members of the legal community, we need to reexamine why, too often, our criminal justice system fails to treat African-Americans the same as white Americans, and recommit ourselves to the systemic change needed to make equality under the law an enduring reality for all. This must be a time not just of reflection but of action.”  In 2016, Chief Justice Gants courageously asked Dean Martha Minnow of Harvard Law School to undertake an independent study of racial and ethnic disparity in the rates of imprisonment in Massachusetts.  Four years later,  the Criminal Justice Policy Council at Harvard Law School released its report, “Racial Disparities in the Massachusetts Criminal Justice System” (September, 2020).  The report documents the disparities that the chief justice described in 2016 and on many other occasions.  Just days before his death and while convalescing from a heart attack, Chief Justice Gants found the strength to issue a call to action: “This impressive report will provide us with important guidance as we work to eliminate racial and ethnic disparities in the Massachusetts criminal justice system.  It is a ‘must-read’ for anyone who is committed to understanding the reasons for such disparities and taking action to end them.”

Chief Justice Gants did not limit his focus to addressing inequities in our criminal justice system.  As Co-chair of the Second Supreme Judicial Court Access to Justice Commission (2010-2015) as well as the third and current Commission (following the retirement of Justice Geraldine Hines in 2017),  Chief Justice Gants worked tirelessly with judges, lawyers, and academics to expand and improve access to justice on the civil side.  He appreciated that the doors to our courthouses open to the streets and that the judiciary, therefore, had to ensure that it met the needs of people who far too often were forced to seek justice without the assistance of a lawyer.   He was a national leader in the movement to permit self-represented parties to bring their cell phones, which often contained important items of evidence, into courthouses, and to develop new procedures to permit judges and clerks to view and consider this evidence.  He encouraged efforts to create a statewide network of court service centers to assist self-represented litigants.  At every turn, he supported efforts to enhance the capabilities of legal service organizations.  Year in and year out, Chief Justice Gants participated in the annual effort to secure adequate funding from the Legislature for civil legal services.  He successfully advocated for the expansion of the Housing Court in 2018. He also helped expand the Access to Justice Fellows program that taps the energy and experience of retired lawyers and judges to work on projects to improve access to justice. Chief Justice Gants was active in the National Conference of Chief Justices where he championed the cause of access to justice for all.

This list of Chief Justice Gants’ efforts to improve access to justice and equal justice for all is incomplete. In time, much more will be written about his efforts to improve the quality of life for all who lived in this Commonwealth.  Nonetheless, this brief recitation of the initiatives undertaken by Ralph Gants in addition to his duties as chief justice is indicative of his core belief, as expressed by abolitionist minister Theodore Parker who said in a sermon delivered in 1853: “I do not pretend to understand the moral universe.  The arc is a long one.  My eye reaches but little ways.  I cannot calculate the curve and complete the figure by experience of sight.  I can divine it by conscience.  And from what I see I am sure it bends toward justice.” It falls to us – all of us, judges, court staff, lawyers, and all people of goodwill—to honor the memory of Chief Justice Ralph D. Gants by rolling up our sleeves and getting back to work.

Your cart is empty